Daniel attempts to find the coffin of Barnabas, and a seance is held to contact him.

The night continues toward its darker hours in this Collinwood of another, yet concurrent time. And the one man who's had experience in both, Barnabas Collins, is still captive of the writer William H. Loomis. Ignorant of the knowledge that on this night, the warp between the bands of time will reveal to other eyes the mystery of multiple existence, and some truth about the fate of Barnabas with a mention of a curse.

Quentin goes to the East Wing and opens the doors to Angelique's room. But he instead sees Julia from the other timeband calling out for Barnabas. Quentin calls out for Hoffman, and she appears behind him.

Quentin turns around and the room has changed back to Angelique's room. He explains to Hoffman that he just saw her dressed in completely different clothing and was talking about Barnabas and his curse. Quentin only gets more confused as he tries to figure out what he just saw and excuses himself.

The next morning, Angelique and Daniel return from a shopping trip. Daniel has purchased a large seashell and tells Angelique that when he was little, his mother would tell him that if he held one up to his ear, he would hear his mother whispering to him. He holds up the seashell to his ear as Angelique tells him "your mother is very close to you." Quentin soon rushes downstairs and immediately notices the portrait of Barnabas Collins has been hung in the foyer. Hoffman shows up and tells him that Trask hung it up, but Quentin orders it to be taken down immediately.

Quentin and Angelique go to speak in the drawing room, and Quentin confesses that he hasn't been feeling well lately. He reveals to her that he is planning to leave Collinwood, and admits he is frightened by the strange things he's seen in the East Wing.

Meanwhile, Daniel is in Angelique's room and Hoffman catches him. Hoffman notes how he has arranged his seashells just as Angelique used to, which upsets Daniel and he runs out of the room. Angelique arrives and Hoffman suggests that Daniel leaves Collinwood for a while. Angelique pretends to agree, but secretly wants to keep him at Collinwood.

Daniel returns to the foyer and gazes at the portrait of Barnabas. As he stares at him, he begins to hear a heartbeat, and vows to find Barnabas.

Later that day, Quentin and Hoffman are discussing Barnabas in the drawing room. The two wonder if William might know anything, but Quentin says he doesn't want to deal with him.

That night, Daniel enters the Loomis House, but finds that no one is there. He notices several pieces of paper, which Daniel assumes are excerpts from William's new book about Barnabas.

Back at Collinwood, Angelique enters the East Wing and sees Julia in the regular timeband. Angelique tries to call out for her, but Julia is only wondering where Barnabas is.

Daniel is still at the Loomis House and finally finishes reading all of the papers. He is determined to find Barnabas' coffin.

Daniel approaches the basement door, but it is locked. He attempts to break the door open, but Quentin shows up and stops him. Daniel faints.

In the drawing room at Collinwood, Angelique explains to Hoffman what she saw in the East Wing. As the two discuss Barnabas, Quentin returns with Daniel, who is apparently feeling better. Daniel notices the portrait of Barnabas has been removed, and Hoffman tells him she had Trask remove it. After Hoffman takes Daniel upstairs, Angelique confesses to Quentin that she saw her room transform in the East Wing. Quentin decides there will be a seance to contact Barnabas.

That night, Quentin, Hoffman, and Angelique begin a seance to contact Barnabas. A spirit enters the room, but Hoffman gets frightened and runs out. Moments later, Angelique notices someone is standing in the corner of the room with his back to them. 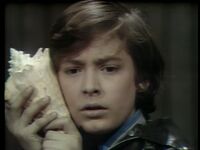 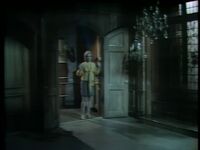 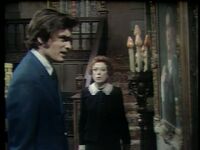