The great estate of Collinwood in Parallel Time, and the secrets of those in the house have never been more dangerous. For Quentin's first wife, Angelique, has returned from the dead, and assumed the identity of the sister she has murdered. And seemingly, no one can penetrate her disguise. The strange time is perilous too for Barnabas, who lies trapped, chained in a coffin, unable to help, unaware of the dangers which threaten those around him. And this night in the village, Cyrus Longworth is confronted by a man who has helped him with his experiment. Who now suddenly has many questions, and too many answers.

Horace goes to visit Cyrus in the middle of the night and accuses him and Yaeger being the same person.

Cyrus dismisses Horace's claim and calls him crazy, although he is clearly shaken by his theory. Horace lists off all the proof that he has gathered in his investigation, which makes Cyrus very upset. After much taunting, Horace demands $10,000 dollars from Cyrus for him to keep quiet about his experiment and to continue delivering the antidote, by Cyrus refuses and kicks him out.

At Collinwood, Angelique takes Quentin into the basement and tells him that Hannah has exorcised Dameon's ghost. Quentin is skeptical of her claim, but Angelique opens the secret panel, revealing Dameon's skeleton. He wants to call the police to tell them that Dameon was murdered at Collinwood, but Angelique says that isn't fair, since he isn't doing anything to find out who murdered Angelique at the seance.

Upstairs, Elizabeth and Hoffman have just returned to the estate. Hoffman tells her that she came back because she missed Collinwood and felt she needed to return. Elizabeth scoffs at her comment and says she would much rather close down Collinwood and move to the city, but she doesn't have nearly as much money as Quentin does.

Meanwhile, Angelique is on the phone with Hannah, informing her that Quentin believed everything she said about exorcising Dameon's ghost. Hoffman soon enters the foyer and stares at Angelique.

In the drawing room, Elizabeth tells Quentin that she saw Maggie in New York, and Maggie has asked for him to come to her. She tries to get him to go, but Quentin wants no part of it. He compares Maggie to a "child," one who runs away and sulks. Angelique is listening to the conversation from the foyer, and flashes an evil smile.

Later, Quentin shows Cyrus the skeleton in the basement. Cyrus determines he was shot in the rib cage and died from a loss of blood. He asks for Cyrus' advice on whether he should call the police, but Cyrus doesn't want to make that decision for him. Quentin suspects Bruno was the murderer, but he decides against calling the police, fearing that it will trigger more conversation about Angelique. Quentin tells Cyrus they will bury the body in the woods and then deal with Bruno.

Upstairs, Hoffman is in the East Wing, speaking to Angelique's portrait. She confesses that she only came back to Collinwood because she sensed that Angelique had returned. Angelique enters the room and is shocked at what she hears.

Hoffman turns around and sees "Alexis." She "realizes" how close Hoffman was to Angelique, and tells her that she needs a friend in the house to help her find out who murdered Angelique.

Quentin and Cyrus return from burying Dameon's skeleton. Quentin confesses to Cyrus that he has been under a lot of stress lately, and tells him about Barnabas and a room in the East Wing where he heard Barnabas' name. Cyrus isn't quite sure if he believes his story to be real, but suggests he needs a vacation and should leave Collinwood for a while.

After Cyrus leaves, Quentin goes to the East Wing and sees the main time-band. Julia is trying to explain to Elizabeth that parallel time is real. Elizabeth wants to close the room permanently, but Julia says this room is the only way for Barnabas to come back. Elizabeth leaves, and Julia remains, calling out for Barnabas. Quentin calls out for Julia, and Hoffman appears behind him, asking him what he wants.

Quentin (to Cyrus, after burying Dameon's remains): Another thing to feel guilty about. . . . I'm getting pretty good at accumulating guilts.

Julia (to Elizabeth in the PT room, speaking of Barnabas): I feel closer to him here. . . . If I thought I could join him, I would stay here forever.

Julia: Barnabas, can you hear me? Are you standing in that hall in the other time, watching me, unable to make me hear you or see you, or has your curse, that terrible curse, been discovered? 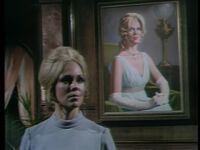 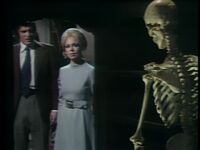 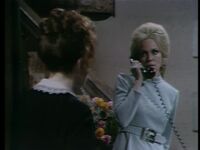