The great estate of Collinwood as it exists in the strange and disturbing world of Parallel Time. A time in which each person follows a new destiny. Upon entering this new world, Barnabas Collins became trapped in a chained coffin, a prisoner of a half-mad author, Will Loomis. He is unable to follow the different fates of those around him. He does not know of the spirit that has haunted the great house, or of the strange, supernatural ceremony that will take place there this terrible night.

Angelique begins a ceremony at the sight of Dameon's tomb in the Collinwood basement. Moments later, Dameon appears to her.

Dameon appears to Angelique and reveals that Bruno killed him out of jealousy for Angelique's affections, but Angelique won't let him avenge his own death. Angelique puts out her candles out and Dameon disappears forever.

At the Eagle Tavern, Yaeger is flirting around with Buffie, who appears to be annoyed with him. A man soon walks in and identifies himself as Larry Chase, a partner of Chris. Larry wants to know why Cyrus is having so much money put into Yaeger's account, and wonders if Cyrus is being blackmailed. Yaeger angrily denies Larry's accusations, but Larry seems unintimidated and rips up the contract that Cyrus had signed to "give" Yaeger the money. Yaeger gets upset and leaves, and Horace enters. Larry goes to the bar to get a drink from Buffie and asks her questions about Yaeger and Horace eavesdrops from a distance. After Larry leaves, Horace picks up the letter that Larry ripped up earlier and hides it in his coat pocket.

Meanwhile, Yaeger returns to the lab and drinks the potion to turn back into Cyrus.

Later that night, Cyrus is working in the lab and Buffie arrives to see him. She confronts him about telling Yaeger bad things about her, and that she was beaten by him. Cyrus offers to do whatever he can to make up for it. There is knock on the upstairs door. But before Cyrus goes to answer it, he escorts Buffie out the side door. As Buffie leaves, Horace appears from the shadows and eavesdrops. Cyrus opens the upstairs door and Larry arrives. Larry suggests that Cyrus end his "friendship" with Yaeger, and reveals he tore up the financial agreement between the two. Cyrus also reveals another startling revelation: in the event of his death, all that he owns must now go to Yaeger.

Larry is shocked at Cyrus' decision to change his will, and reluctantly agrees to do it.

Meanwhile, Horace goes to Buffie's apartment and starts asking her questions about Cyrus. Buffie gets upset and thinks Horace was sent by Yaeger to spy on her. While they are talking, Horace notices the painting on Buffie's mantle that used to be in Cyrus' lab. Buffie admits that Yaeger gave it to her, which shocks Horace. He excuses himself.

Horace immediately goes to Cyrus' lab and tells Cyrus that he knows he and Yaeger are the same person.

John Yaeger: How could anyone blackmail the good Dr. Longworth, huh? The man is a vegetable! He neither smokes nor drinks...he doesn't know the meaning of adventure. In short, the man is a cloistered bore, and how could anybody possibly blackmail a man like that?
Larry Chase: You're not only arrogant and disgusting, Mr. Yaeger, you're a model of ingratitude. Dr. Longworth is being more than generous with you! 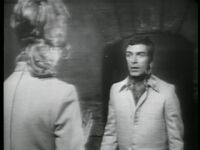 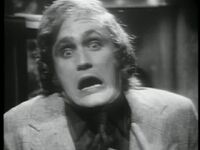 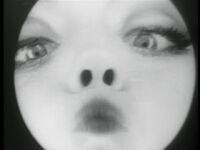 Buffie
Add a photo to this gallery
Retrieved from "https://darkshadows.fandom.com/wiki/1006?oldid=142584"
Community content is available under CC-BY-SA unless otherwise noted.