Angelique, determined to banish the ghost of Dameon, begins a special ceremony.

The lights of Collinwood gleam into the night mist, unable to disperse or penetrate the mysteries enveloping the proud estate. For this is that other Collinwood, in Parallel Time. And it is here that Barnabas Collins lies captive in a chained coffin. While around him, events of infinite dread stride unchecked toward a climax of horror, as the ghost of Dameon Edwards makes his portentous intrusion into Quentin Collins' dreams.

Dameon leads Quentin to an abandoned part of Collinwood and tells him he is going to show him "how it will all end." He opens a door and finds a man hanging from the ceiling. Quentin finds a note near the body that says "I did this to be with the one I love."

Quentin wakes up and decides to have a drink to calm his nerves. He starts thinking about the note in the dream and calls out to Dameon, wondering if his dream will soon become reality. Quentin goes to the attic of Collinwood, but finds there is no body hanging from the ceiling.

Hannah is discussing the Dameon situation with Angelique. Angelique tells her she will handle everything, but it is clear they are both very frightened over his presence. Hannah tells her she wants no part of Dameon. As they argue, Quentin walks in and asks to speak with Hannah alone.

Meanwhile, Cyrus is working in his lab with Horace. Cyrus asks for another bottle of the compound, and wants it immediately. Horace still wants to know what the experiment involves, but Cyrus dodges his questions. Horace leaves and Cyrus prepares to take the potion to turn into Yaeger.

At Collinwood, Quentin explains his dream to Hannah, and asks her to exorcise Dameon's ghost from the house. Hannah refuses, but soon the lights go out and the two realize Dameon is somewhere nearby.

Dameon appears to Quentin and Hannah, but he does not speak. Instead he stares the two down and quickly disappears. The two go back downstairs and Quentin makes Hannah swear to him that she won't say a word about this to Alexis. Cyrus and Angelique are in the drawing room, and Cyrus informs them that he is "going out of town for a few days." Quentin and Cyrus go into the drawing room and Quentin tries to convince him not to leave, but Cyrus insists he has to leave. Before Cyrus leaves, Quentin confronts him about how he found two notes saying the same thing, but in different handwriting. Cyrus merely says that he felt he was writing so fast, his writing wouldn't be legible, and he decided to start over. Quentin seems to buy his excuse, but once Cyrus leave, Quentin examines the notes once again, and again appears to have doubts.

Upstairs, Hannah takes Angelique to the attic and explains she had seen Dameon's ghost moments ago. Angelique calls out to Dameon, and tells him they will soon meet at his grave.

Cyrus is back at his lab and trying to resist taking his potion. After much deliberation, he caves and drinks it, and the transformation begins.

Hannah and Angelique enter the basement at Collinwood, and the two can sense Dameon's presence.

At the lab, Cyrus has turned into Yaeger and prepares to leave, but Horace shows up with another package of the compound Cyrus had requested. Horace asks Yaeger many questions, but Yaeger only threatens him, and tells him to leave the package and go. In turn, Horace tells him if he threatens him again, he will cease his cooperation with Cyrus. Yaeger admits defeat and Horace leaves without giving him the package. 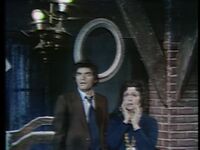 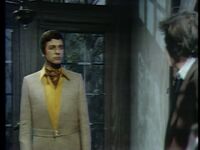 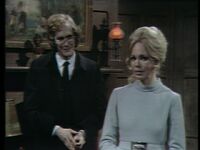