Hannah discovers the secret about her niece Angelique.

The great estate of Collinwood as it exists in Parallel Time, and two men are in greater danger than they have ever been before. Quentin Collins' wife has returned from the dead and taken the identity of the twin sister she murdered. And Barnabas Collins lies in this coffin, a prisoner of William H. Loomis, his voice stilled. Were he able, Barnabas could explain a mystery that Quentin has just discovered and can not understand.

Quentin sees David and Amy from the main timeline and yells out for them. Moments later, Daniel and Amy in the parallel timeline show up behind Quentin, causing much confusion.

Quentin shrugs off what he has just seen and asks Daniel and Amy if he has heard Will say anything about someone named Barnabas Collins. After they both reply that they haven't, he sends them away and opens the door to Angelique's room and finds that it is fully furnished. Quentin explains to Angelique (still thinking she is Alexis) about how the room was empty just moments ago. He is frustrated with his own confusion, but he is at least thankful for not having any Dameon sightings lately. The name Dameon catches Angelique off guard, but she quickly changes the subject to wanting to know who murdered Angelique during the seance six months ago. Quentin assures her that he is doing everything he can to find out who did it. Angelique suddenly starts to feel cold and kicks Quentin out of her room, much to his surprise, and wonders what is happening to her.

Daniel and Amy are in an old storage room at the Loomis House. Amy remarks at how Will has been keeping the basement locked lately, something he never used to do. Daniel also mentions how a secret passageway from the beach to the Loomis House basement has also been blocked off. As the two are about to leave, Daniel hears what sounds like a heartbeat coming from a bunch of portraits that are stacked together. After investigating further, the heartbeat is coming from the portrait of Barnabas. Amy looks at the portrait, and promptly screams and faints.

Amy is in a daze and only says the words "chains" and "trapped." Wilfred, a groundskeeper for the Collins family, barges in and scolds the children for being in the storage room. He takes the two back to Collinwood, but Daniel brings the portrait of Barnabas with him.

At Collinwood, Quentin thanks Fred for bringing the children back, and wonders what could be wrong with Amy. As Wilfred leaves, Angelique catches him before he can walk out of the house. She is still very cold, and asks Fred to give her a hug.

Later, Angelique, posing as Alexis, goes to visit Hannah. Hannah is surprised to see her, knowing that Alexis didn't care much for her. Angelique asks Hannah to read her fortune, which shocks Hannah. As Hannah reads her tarrot cards, she tells "Alexis" that she has no future. When asked to read her palm, Hannah discovers that "Alexis" is Angelique.

Hannah is extremely frightened with the knowledge that Angelique has returned from the grave. Angelique demands to know why Dameon is haunting Collinwood. Before Hannah can answer, Angelique starts to feel cold again. After she calms down, Hannah suspects that Angelique has come back to get revenge on Quentin and the family over her death. Angelique again feels cold and suspects that she doesn't have much time left. She asks Hannah to go to the Loomis House to get Wilfred and bring him back. Hannah realizes she is going to kill him for his warmth and refuses, but Angelique tells her that if she does not oblige, she will die and haunt her for the rest of her life. Hannah reluctantly goes to get Wilfred.

Quentin is looking over Amy in the drawing room at Collinwood. Amy tells her she was frightened after she looked into the eyes of Barnabas' portrait. Quentin reminds her that Barnabas has been dead for roughly 200 years, and she shouldn't be worried.

Hannah brings Wilfred back to her house and leaves him with Angelique. The two embrace again, and Wilfred begins to feel cold, much like Angelique did. Angelique forces him to kiss her. After they kiss, he collapses and dies. Hannah rushes back in and examines Wilfred, and notices that it seems like he has been dead for hours, not seconds. Angelique realizes this is the way she has to live, and soon Quentin will suffer the same fate.

Angelique (posing as Alexis): It’s very fashionable these days to blame my sister for everything, and everybody seems to ignore the fact that she was murdered! 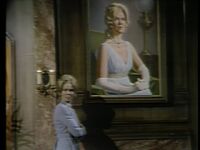 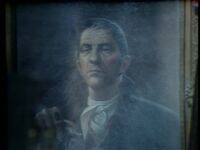 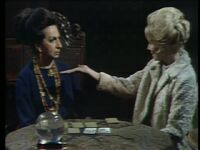 Palm Reading
Add a photo to this gallery
Retrieved from "https://darkshadows.fandom.com/wiki/1003?oldid=142578"
Community content is available under CC-BY-SA unless otherwise noted.