Night clouds hang still over the towers of Collinwood, this Collinwood of concurrent, Parallel Time, where Barnabas Collins continues his captivity in the coffin chained by the writer Will Loomis, while other destinies and other dooms await the same people who have the same appearance as those he'd known before. And of all these, that which now grips a young and brilliant doctor threatens a tragedy and a terror unimagined.

Cyrus is in the drawing room when he suddenly feels pain and transforms into Yaeger. He tries to leave, but hears Quentin at the top of the stairs, so he closes the drawing room doors and locks them, trying to keep Quentin out.

Quentin is unable to open the door, so he calls for Trask to bring him the keys. This gives Yaeger time to write a note explaining Cyrus' absence, but in his haste, he accidentally writes it in the handwriting style he uses for Yaeger rather than for Cyrus. He wads up the note and throws it to the floor, duplicates the note in Cyrus' handwriting, unlocks the door, grabs Cyrus' glasses from the other side of the room, and exits through the window. Quentin returns with the keys, but finds the doors unlocked. He goes inside and finds the note and reads it just before Amy unexpectedly shows up. She is upset because Will did not want her around and sent her back to Collinwood. Quentin apologizes and tells her he was about to send for her since Daniel is about to return with Roger. He asks her to take her things upstairs and then come back down, but before she goes, she finds the crumpled note in Yaeger's handwriting and gives it to Quentin. Quentin uncrumples it, glances at it then takes it to the fireplace. Just before he tosses it in, he stops and compares it to the note "Cyrus" wrote. He notes the similarity and differences in handwriting.

Meanwhile, Yaeger returns to the lab and gets the antidote from the safe, but then decides he wants to "have a little fun," and puts it back.

In the East Wing at Collinwood, Daniel tells Amy he doesn't believe her story about seeing Dameon disappearing in the basement. Quentin shows up and tells her he wants her to forget all about Dameon. She tries to get Quentin to back up her story, but when he doesn't and leaves, she gets frustrated and leaves, so Daniel tells her to tell him again and he will believe her this time.

Back at the lab, Yaeger decides to move a painting from the lab to his apartment near Buffie. He hears the upstairs door open and Sabrina calling for Cyrus, so he quickly sneaks out the side door before she can see him.

At his empty apartment, Yaeger comes in and puts the painting on the mantle. Buffie knocks on the door, saying Minnie told her that he was home. She compliments him on the picture. He cross examines her about her visit to Cyrus, asking her if she has done anything to be afraid of.

Back at the lab, Sabrina talks to Quentin on the phone, who is puzzled that Cyrus is not there. She then notices the missing picture. Quentin notices the change in her voice on the telephone, but Sabrina dodges the subject and hangs up.

At Yaeger's apartment, Yaeger questions Buffie about her trip to the laboratory to visit Cyrus, and she says she only went there to find out if the check he gave her was valid, which he tells her means she must not have believed him. He tells her it bothers him that she does not like him, and she tells him she does, so he brings up the phrase "a quiet man." She lies mostly, horrified that Cyrus must have told Yaeger everything in detail. Yaeger tells her he can be a quiet man, and to prove it he does not say a word as he strikes her across the face.

Buffie is recovering from getting beaten by Yaeger, crying with both of her sleeves ripped and cuts on her face, while he tells her he had to prove he can be "a quiet man". She asks him to let her go back to her room, but before she goes, he gives her the painting. She thinks it is a trick, but accepts the painting. He then asks her to go out to dinner with him. She smiles and accepts his offer, at which point he laughs at her, saying in her condition, with cuts on her face and bruises on her arms, he would be embarrassed to be seen with her. If she wants to attract his attentions, she needs to take better care of herself. He shows her to the door, having a good laugh after she is gone.

Back at Collinwood, Amy shows Quentin a page from Will's manuscript and tells him she got it to draw on while she was waiting, and discovered he was writing a new book about a room in the East Wing of Collinwood which she thinks might be Alexis/Angelique's room. He sends her away puzzled, telling her not to bother Alexis.

At the lab, Yaeger returns and goes for the antidote, but Sabrina shows up before he can take it. Sabrina tells him to leave, but he says he is going to wait for Cyrus, and perhaps they can get "better acquainted." She eventually gets frustrated with him and leaves. Shortly thereafter, he goes to the safe and takes the antidote.

In the East Wing at Collinwood, Quentin hears what he thinks are the voices of Daniel and Amy. He opens the door and sees the empty room, with David and Amy from the main timeline arguing about whether to stay or leave. David wants to stay and see if anything happens because he heard Roger and Julia saying that Barnabas had "gotten caught" here. Amy doesn't want to get caught and wants to leave because it is past their bed time. Moments later, Daniel and Amy from the parallel timeline show up behind Quentin, asking him who he is yelling at.

John: I won't make a sound. Not a sound. No one will hear anything. Not a single, solitary... sound. 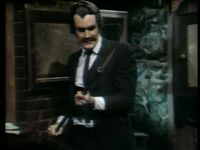 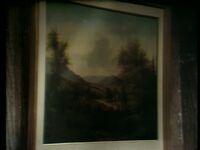 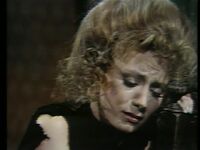 Damsel In Distress
Community content is available under CC-BY-SA unless otherwise noted.
Advertisement