Angelique drains the life from Alexis and switches places with her.

The great house at Collinwood as it exists in the mysterious and disturbing world of Parallel Time. A world which Barnabas Collins was able to enter by way of a warp in time, but a writer named William Loomis learned his dark secret and made him his prisoner. Now, Barnabas lies trapped in a chained coffin, unable to witness or deal with the terrifying events going on around him. On this dark and stormy night, a young woman has returned to the tomb of her dead twin sister, to try and understand why, after six months in the tomb, her body had remained perfectly preserved.

Alexis enters the tomb of Angelique and opens the coffin, touches the body, then apologizes to her saying that she understands now that she must be destroyed. Angelique's eyes flutter open, and she looks at her sister and tells her she is right, someone has to be destroyed, and it will be Alexis.

Alexis watches in horror as Angelique climbs out of her coffin and explains that she knew her spirit would never die, and all she needed to return to life was the touch of a living human being. Alexis begins to feel cold and Angelique tells her that she will feel colder and colder as she is drawing the warmth from her body to live again. Angelique announces that soon Alexis will be dead, and Angelique will take her place at Collinwood.

Outside, Trask debates with himself whether to go into the mausoleum, but remembers that Alexis told him to stay outside. He waits for a while, just long enough for Angelique to get Alexis's body into the coffin and change clothes with her. She asks him to come into the mausoleum and she closes the lid on the coffin before leaving with Trask.

Back at Collinwood, Quentin has another instance of the lights going out and the windows opening by themselves, and he calls out to Dameon's spirit, asking him to communicate with him, but everything returns to normal just before Angelique and Trask return. Angelique dismisses Trask and talks to Quentin in the drawing room, saying she has thought it over and she agrees her sister's body should be destroyed immediately.

Trask is cleaning in the drawing room when Quentin comes in and asks if Cyrus has called. Quentin has Trask cancel a dinner engagement for him while he calls Cyrus in the laboratory and asks him to come to the mausoleum. As he prepares to go, Chris arrives, asking about the instructions Cyrus left for him to withdraw $5,000 from his account and open an account for John Yaeger with the money. Chris asks if Yaeger is a pseudonym he is planning to use and Cyrus tells him he is someone he has met recently, but trusts infinitely. Chris thinks Cyrus can't afford to hire someone for the lab for that much money and Cyrus assures him he is not being blackmailed. Chris tells him to have Yaeger come to his office to sign some documents, and he will be interested in meeting him. Cyrus tells him he will send Yaeger to him.

Cyrus leaves shortly thereafter to meet Quentin at the mausoleum. Quentin tells Cyrus he needs his help destroying "Angelique's" body and his plan is to take the coffin outside and burn it with a torch. Cyrus is afraid they will get caught, but agrees to help. Quentin shares one final moment with "Angelique" and then takes her coffin outside with the help of Cyrus.

Outside the crypt, Quentin prepares a torch and sets the coffin on fire.

Back at Collinwood, Angelique prunes some flowers when Trask walks in to let her know Quentin has returned home. He says it is almost like Angelique never died, which gets Angelique curious.

Downstairs, Quentin and Cyrus return and Cyrus wants to head back to his lab, but Quentin tells him he must have a drink with him and goes upstairs to get Alexis. Quentin arrives while Angelique is admiring her portrait. He tells Angelique the body is destroyed and now things will start to change for the better. He says he hopes Maggie will return now and Angelique figures out quickly who she is and says she hopes they will become good friends now. She tells Quentin she has become "very fond" of him and he tells her Cyrus is downstairs waiting to have a drink with them. She says she wants to stay in her room for the night. He leaves and she goes back to admiring her portrait.

Downstairs, Cyrus is still cooling his heels when he transforms into Yaeger. He tries to leave, but hears Quentin at the top of the stairs, so he closes the drawing room doors and locks them, trying to keep Quentin out.

Angelique: My dear Alexis, you are oh so right. Someone must be destroyed, but it won't be me....It will be you! 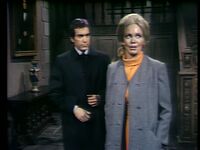 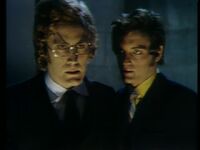 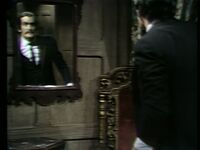