Quentin, Cyrus, and Alexis find that Angelique's body is in the coffin and perfectly preserved.

The great house at Collinwood as it appears in the world of Parallel Time, running concurrently with our own. A world that has mysteriously opened itself to Barnabas Collins, but soon after he appeared in this time his darkest secret was discovered by a man named William H. Loomis. Now Barnabas Collins lies trapped in a chained coffin, unaware that on this night in a graveyard not far from Collinwood, three people are about to open a coffin, and settle a mystery that has plagued all who live at Collinwood. Did Angelique Collins really die six months before, or does she still live in the guise of her twin sister Alexis?

Quentin and Cyrus prepare to open Angelique's coffin, but Alexis shows up and stops them. She offers to leave Collinwood forever if he doesn't open it, but Quentin rejects and opens it anyway.

Quentin, Cyrus, and Alexis find Angelique's body is still in the coffin, but her body is perfectly preserved. Quentin asks Cyrus for an explanation, but he is just as astonished as everyone else. Alexis wants to close the coffin and leave, but Quentin says the body must be destroyed. Quentin finally closes the coffin, but decides to leave it out in the open for the time being.

Meanwhile, Trask is at Collinwood and Amy returns. Amy tells him she hates staying at the Loomis House because there is no one to talk to. Trask tells her to go back, as it would upset Quentin if he found her at Collinwood, but she refuses. Amy thinks Trask is afraid of something, and asks if anyone has seen Dameon. Trask gets very upset and demands to know if she has seen Dameon anywhere.

Quentin, Cyrus, and Alexis return to Collinwood just in time to stop Trask from harming Amy. Trask apologizes and tells Quentin he has been very uneasy since Dameon returned from the grave. After Quentin leaves to console Amy, Alexis and Cyrus inform Trask that they have opened Angelique's tomb and her body is inside, which should end any doubt about who Alexis really is. Trask believes their story, but is still convinced that there is an evil spirit at Collinwood. After Trask leaves, Cyrus tells Alexis he has something very important to discuss with her, and they head to the East Wing as Trask eavesdrops on them.

Cyrus and Alexis enter Angelique's room and Cyrus asks her about Angelique's interest in the occult. Alexis says she doesn't know much she was involved in it, but Cyrus agrees with Quentin that the body must be destroyed to prevent any chance of her actually coming back.

Meanwhile in the drawing room, Amy apologizes to Quentin for coming back to Collinwood, but tells him she doesn't want to go back to the Loomis House. Amy explains that "something is happening" in the Loomis House, but she isn't quite sure what it is, and she is very frightened by it.

Amy reveals to Quentin that Carolyn has hardly been spending any time at the house, and Will is too busy writing a new book. The news surprises Quentin, because Will hasn't written anything in almost 5 years. Amy gives Quentin two pages from Will's new book, and Quentin learns he is writing a new, more accurate book about Barnabas Collins. Quentin tells Amy he will have to ask Will about his new book.

Alexis meets with Trask in the East Wing and she asks him to drive her back to the cemetery. She wants to see her sister's grave again and doesn't want anyone to know about it. Later, Alexis and Trask arrive at the mausoleum. Alexis goes in by herself and talks to her dead sister, and tells her she is going to destroy her body. After Alexis touches her arm, Angelique wakes up and tells her that it will be Alexis who will be destroyed.

Dark Shadows Everyday - Episode 1000 - Back From the Death 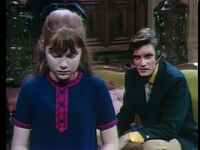 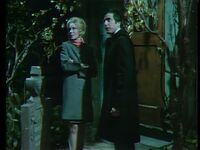 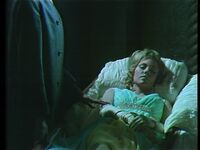 Touch of Life
Community content is available under CC-BY-SA unless otherwise noted.
Advertisement